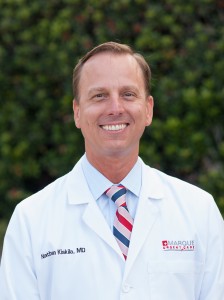 Q. and A. with Dr. Kiskila- This Month’s Topic: Flu Shots

Question- Dr. Kiskila, do flu shots really work?  If so, why?

Answer- According to the Centers for Disease Control (CDC), the influenza vaccine is effective in about 70%-90% of healthy individuals less than age 65. It’s about 30%-40% effective in elderly persons, and 50%-60% effective in preventing hospitalizations and 80% effective in preventing death. The flu vaccine contains the virus strains that are predicted to cause the flu. Once your body develops immunity to the flu strain, it’s more likely to have a resistance to it. This year’s flu shot will contain the H1N1 like virus.

Answer- The advisory committee on immunization practices recommend that all persons age 6 months and older without any contraindications get a flu shot and recommend focusing on persons with high risk of influenza complications.

According to the CDC, persons who have experienced severe allergic reactions to the vaccine or any of its components, or to a previous dose of any influenza vaccine should not get a flu shot as well as pregnant women, immunosuppressed persons, persons with a history of egg allergy, children aged 2 through 4 years who have asthma or who have had a wheezing episode noted in the medical record within the past 12 months, or persons who have taken influenza antiviral medications within the previous 48 hours.

Answer- The flu shot contains three or four strains of the flu virus, so there is a good chance that it will cover one of the strains you may catch.

Question- When is flu season and when should I get a flu shot?

Answer- Flu season peaks in late December to early March. Vaccines should start as soon as they become available in mid-October and should continue throughout the flu season.

Question- Dr. Kiskila, will this be a bad flu season?

Answer- Unfortunately, it is not possible to predict what this flu season will be like because the timing, severity, and length of the season varies from year to year.