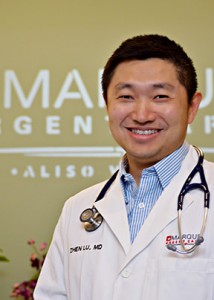 The Flu vs. The Common Cold by Richard Lu, M.D.

The flu season is quickly approaching and it is necessary to be prepared.  It can begin as early as October and occur as late as May.  Both the flu and the common cold are respiratory illnesses, but they are caused by different viruses. Because these two types of illnesses have similar flu-like symptoms, it can be quite difficult to tell the difference between them based on symptoms alone.

In general, the flu is worse than the common cold.  The flu has symptoms such as fever, body aches, extreme tiredness, and dry cough which are more common and intense. Recovery from the flu can range from a few days to several weeks.   There are special tests that can be done within the first few days of illness, when needed to tell if a person has the flu.

Colds are usually milder than the flu. People with colds are more likely to have a runny or stuffy nose because germs that cause colds infect the nose and sinuses.  The nose creates mucus to help wash the germs from the nose.  Other signs and symptoms of the common cold include: sneezing, sore throat, coughing, watery eyes, mild body aches or headache.  Because colds are not as severe as the flu, they generally do not result in serious health problems such as pneumonia, bacterial infections, or hospitalizations.

The Centers for Disease Control recommends that everyone who is at least 6 months of age should get the flu vaccination.  The flu shot is particularly important for those who are at a high risk of developing serious complications (such as pneumonia); which includes pregnant women, people 65 and older, and those with medical conditions such as diabetes, asthma, and chronic lung disease.

Just a friendly reminder, do not forget your flu shot this year!