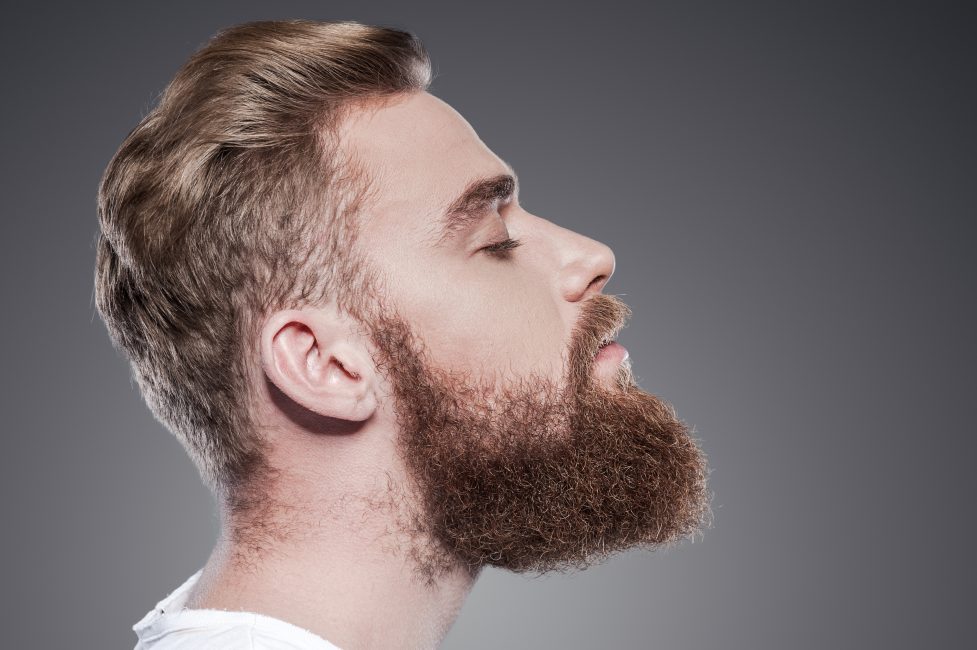 Don’t Fear the Beard, Embrace It

No one knows the true history of its origins or when it became the accessory of masculinity, but what can be said about this mystical forthcoming that garners so much attention is this: the beard invasion has been resurrected.  Whether a guy is sporting a full-bodied King Leonidas, a primped 5 o’clock shadow, like Ryan Gosling, or anything else in between, the beard is the contemporary on-point trend of actors, athletes, and musicians, and its appeal seemingly continues to grow among the masses. And despite James Harden’s mantra to “fear the beard,” men would be wise to embrace it. Unfortunately, lack of proper grooming knowledge leaves many men looking less like an all-star or Spartan of the 300 infantry, and more like an unkempt Lord of the Rings dwarf.  We’re looking at you, Gimli. With the proper guidance and advice, once can achieve an intentionally gritty exterior, all while donning the ultimate beard.

As infants and young children, both males and females grow vellus hairs. Originating as a light soft coating, the vellus hairs turn to a thickened and dark texture during puberty. This is due to androgens, which are present in both sexes. Because males have more androgens than females, men come to produce coarse hair predominately on their chest, upper lip, and of course, their face. We know you always wondered why men have beards and what makes the hair the way it is. Now you know. According to Charles Darwin, this occurrence is related to evolution. Darwin believed that upon entering adulthood a man’s hair growth played a crucial role in attracting the opposite sex, while also intimidating those of the same-sex. The thicker the beard, the more threatening and attractive the man…in theory.

Now that we’ve got you craving that beard more than ever, it’s time to cover a few things as you attain it….

Sure, that’s certainly easier said than done, and unfortunately, most of the myths surrounding the acceleration of hair growth have been proven false. For instance, certain foods and vitamins cannot simply make a beard alone grow faster, however amino acids and protein can contribute to general hair growth. Biotin (B complex) has been linked to the strengthening of hair, but little evidence supports that it can actually speed up the growth process. One of the more commonly believed myths, made popular by one Jerry Seinfeld, is the perceived notion that shaving prompts hair to grow back thicker and stronger; dermatologists have debunked this myth and assure one does not have to do with the other. A belief to take into consideration is getting an adequate amount of night’s rest. A study has shown that losing sleep may negate hair and beard growth.

Daily manscaping is not necessary, but a beard cannot take care of itself; it requires commitment. During the growing process, there are two key elements to keep in mind: don’t scratch, and let it grow. As the beard begins to develop, skin irritation may come along with it, which is normal. Scratching may puncture the skin and cause infection, so again, do not scratch.  In the coming months, the beard will begin to develop and form an unruly silhouette.  lthough difficult to overcome the urge to not begin trimming, one must resist. Regardless of desired length, attempting to shape a premature beard is a common and bush-league mistake. Once the hair has exceeded 1 inch to 1.5 inches, the sculpting process may begin.

To avoid gathering leftover breakfast, lunch, and dinner debris in the newfound beard, try taking smaller bites when eating, and wipe around the mouth continuously during a meal. Once it comes time to wash the beard, make sure the proper tools and products are being used. Although hair sits on top of the facial skin, avoid using body soap to cleanse that area. Instead, shampoo and condition the beard, but not with the same products typically used on the scalp.  Hair care should be made of a thick, yet soft and moisturizing consistency, comprised specifically for the bearded region. Remaining particularly meticulous when choosing a product will keep hair from becoming brittle and wiry. After cleansing, pat dry with a towel, and remove tangles by brushing with a wide-toothed comb. Although it is not recommended to skip out on bathing all together, washing the beard should be administered only a few times a week, once every other day or so. This prevents hair and skin from drying out.

While in the process of constructing a bearded masterpiece, an electric trimmer may be used to shed some hair around the edges; scissors and a comb may also be utilized. On a more advanced level, sculpting close to the face will require a single-bladed straight razor. Before shaving, open up the pores while resting a hot towel on the face. After shaving, rinse with cool water to close the pores.  This may eliminate ingrown hairs, redness, and painful nicks. If this is a DIY project, patience is absolutely vital. Take a few extra moments to add water to a shaving cream, and shave with the grain — not against. This will not only avert a sticky Sweeney Todd situation, but provide for an extra smooth shave, as well. If an ingrown hair is present, do not attempt to simply squeeze and pop it, because dirt in the fingernails can infect the area. Instead, apply a hot towel on the face, disinfect the area with rubbing alcohol, and use tweezers to pinch out the ingrown hair.

Step Five: Enjoy Beard….But Know When to Call it Quits

Beards are not for everyone. Some men will struggle during the process of trying to maintain the lustrous locks they have worked so long and hard to preserve. Then, there will be those who just cannot manage to sprout more than a few displaced whiskers, like Paul Pierce for instance, and that’s okay. Genetics, like any other physical feature, play a huge role in the hair growth process. When the time comes to begin a new trend, tell that beard buh-bye, whip out some shaving cream, a Schick, after-shave, and begin creating a new work of art.