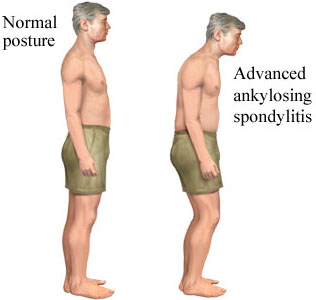 What is ankylosing spondylitis?

Spondylarthrosis, or commonly abbreviated (SpA), is a family of inflammatory disease that includes: ankylosing spondylitis (AS), psoriatic arthritis (PsA), reactive arthritis (ReA), the arthritis associated with inflammatory bowel disease (IBD), and undifferentiated spondyloarthritis (uSpA).  This article discusses ankylosing spondylitis, which is an important and under-recognized cause of chronic back pain in younger patients who are likely to participate in sports and athletic activities. Ankylosing spondylitis (AS) is a type of arthritis in which there is long-term inflammation of the joints of the spine. Typically, the joints where the spine joins the pelvis are affected, but occasionally other joints such as the shoulders or hips are involved. Back pain is a characteristic symptom of AS, and it often comes and goes. National Center for Biotechnology Information, U.S. National Library of Medicine describes it as, “The occurrence of inflammatory back pain, low back or buttock, and hip pain lasting longer than 3 months associated with improvement with activity, worsening with rest, relief with NSAIDs, and morning stiffness lasting longer than 30 minutes.”

Ankylosing spondylitis affects about 0.1% to 0.5% of the adult population. Although it can occur at any age, spondylitis most often strikes men in their teens and 20s. It is less common and generally milder in women and more common in some Native American tribes. Approximately 90% of patients affected express a HLA-B25 genotype, meaning like many autoimmune diseases there is a strong genetic component. 1-2% of individuals with the HLA-B27 genotype contract the disease. “HLA-B27, demonstrated in a blood test, can occasionally help with diagnosis, but is not diagnostic of AS in a person with back pain. Over 90% of people that have been diagnosed with AS are HLA-B27 positive, although this ratio varies from population to population (about 50% of African Americans with AS possess HLA-B27 in contrast to the figure of 80% among those with AS who are of Mediterranean descent).” National Center for Biotechnology Information, U.S. National Library of Medicine

What are the causes?

Low back pain is one of the most common complaints for which patients present to physicians, particularly those who participate in sports. According to the National Center for Biotechnology Information, U.S. National Library of Medicine “Spondyloarthropathies have an estimated prevalence of up to 1.2%, with AS being the most common, affecting approximately 0.5% of the U.S. population and 5% of patients with chronic low back pain. The diagnosis of spondylarthrosis is often delayed by 8-11 years from symptom onset due to the subtle onset and delayed appearance of radiographic changes.”  Ankylosing spondylitis is considered a systemic disease, which means it can affect tissues throughout the body, affecting not just the spine but can also cause inflammation and injury to other joints away from the spine that manifest as arthritis, as well as to other organs, such as the eyes, heart, lungs, and kidneys.

Inflammation being one of the key symptoms is located usually around the spine, which causes pain and stiffness in the low back and neck. The onset of pain and stiffness is usually slow and worsens with loss of range of motion which can be noticeable over a few months. Lumbar pain (low back pain) and buttock pain are common displays of active inflammation in the lumbar spine and sacroiliac joints. The symptoms of pain and stiffness are often worse in the morning or after long periods of inactivity. Because ankylosing spondylitis often affects adolescents, the onset of low back pain is sometimes incorrectly diagnosed as athletic injuries in younger patients.

Unfortunately, there is no known cure for AS, but treatments are available to help reduce the signs and symptoms of the disease. The treatment of ankylosing spondylitis typically involves NSAIDS or immunosuppressant medications to stop progression of the disease, physical therapy, and exercise are also used in correlation to help reduce symptoms.  Medications decrease inflammation in the spine and other joints and organs. Physical therapy and exercise help improve posture, spine mobility, and lung capacity if they become affected.

With this disease having no known cause, there is no way to prevent the disease from happening. If you are having these symptoms, please inform your physician to get the proper testing.